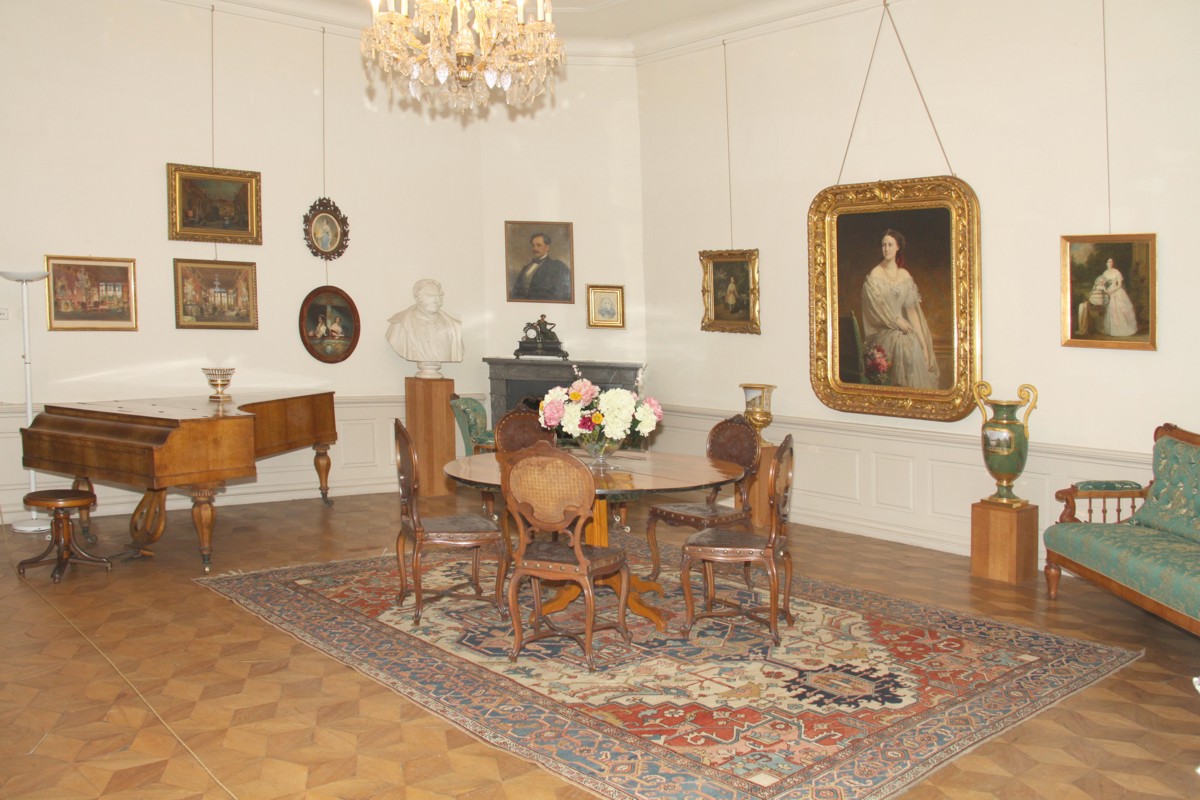 An exhibition under this name was first opened in the Teplice Museum in 1983. It displayed the newly returned art colletions connected with factual events in the European cultural history.

In 1994 this original chateau collection was supplemented by portraits and picutres of noble interiors of the XIX cenutry, the choice of which both reminds us of the first successful exhibition and also acquaints us with the chateau picture gallery and the styles of the European art schools in the XIX century.

The reason of appearing Pushkin´s name in the history of Teplice was the wedding of Elizabeth-Alexandra (Elisalex) Ficquelmont and Edmund Clary Aldringen in 1841. During her stay in Russia mother Elisalex made friends with Alexander Sergeevich Pushkin. The father Karel Ludwig Fisquelmont (1777 – 1857 ) was a well-known personality in the Austrian army and diplomacy in the first half of the XIX century. At the beginning of 1820´s he happened to become an Austrian ambassador in Naples, where in June 1821 he married Darja (Dolly) Tiesenhausen (1804-1863), the grand-daughter of the famous general Kutuzov. In 1828 Karel Ludwig Ficquelmont was appointed an ambassador in St. Petersburg. In the building of the Austrian Embassy his wife organised the famous Literary Salon. One of its distinguished visitors was Alexander Sergeevich Pushkin. Dolly made such a great impression on him, that he depicted many of her features in the characters of his literary heroes. The quarrel between Pushkin and d´Antes in February 1837 also took place in the building of the Austrian Ambassy ( later it led to their duel and Pushkin´s death). Dolly described these events in her diary, she also mentioned there her first visit to Teplice in autumn 1837, five years later after Fisquelmont had stayed in one of the Teplice spas for fourteen days. In the same year Karel Ludwig Fisquelmont started his career as a statesman. In April 1848 he became the Prime Minister, but only a month later he resigned and lived in seclusion. Then he and his wife spent some time in Vienne, in Teplice at their daughter´s and finally in Venice, where he and his wife died. Their remnants were brought to Teplice and put into the Clary-Aldringens faimily tomb in the Virgin Mary Church in Dubí near Teplice.

The exhibition is divided into three parts. The first one is devoted to Dolly and Karel Ludwig Ficquelmont. The portraits, painted in 1825-1848 according to the canons of Italian and Austrian artist schools, show us the both personalities at the top of their careers, the most important event of which was their meeting with the three monarchs in Teplice in 1835 during the unveiling of the Russian monument in Chlumec. Tihs important social event is illustrated by the portrait of the tzar Nicholas I in the Garden hall in Teplice. The second part of the exhibition is devoted to Elisalex Clary-Aldringen (1825-1878) and her family in 1835-1870. The most interesting is her portrait as a child painted by Karl Brullov, the famous artist of the first half of the XIX cenury. Another painting depicts Elisalex with her first son Carlos, the master builder of the church in Dubí. The portrait gallery also incudes the paintings and drawings of the XIX century interiors in Teplice, Vienne, Venice and also the watercolour, the only one known until now, which depicts the interior of the Austrian Embassy in St. Petersburg.The products of St. Petersburg porcelain factory are the two large vases decorated by Teplice vedute. The vases were presented to the Clary-Aldringens family by the tzar Nicholas I as a reminder of his visit to Teplice in 1835.