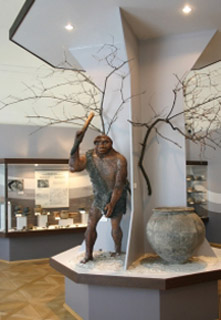 The Primeval history of the Under the Ore Mountains Region

The opening part of the exposition is devoted to the primeval settlements in this region. It provides documentary evidence of the period starting from the early Stone Age (the V- II century B.C.) when the first farmers came there, up to the Roman times and the peoples´ migration on the threshold of a new historical age (the period starting with the change of the calendar and finishing in the V century A.D.).

The settlements and the burial grounds are represented by the ceramic exhibits, stone tools and instruments. The active cultivation of soil led to the formation of villages, the necessity of thorough wood- working for building dwelling houses – to the production of suitable stone tools, and the need to store food necessiated the appearance of ceramics. The acquaintance with the texture of plant fabric, and fabric made of sheep wool, changed the way of clothing, based until then mostly on the skins of fair game. As for the civilization of the Bronze Age ( the II century – the beginning of the I century B.C. ) besides ceramics there are samples of tools, jewellery and weapons made of the new material – bronze. The bronze tools at that time greatly improved the productivity of labour, the bronze weapons provided the effectivity of predatory invasions, and bronze on the whole turned out to be a perfect material for the development of jewellery, especially for the production of clips, bracelets, necklaces and braces. The Celts historally inhabited the north-west Bohemia in the early Iron Age ( the IV – I centuries B.C.). The high professionalism of Celtic craftsmen is proved by the findings in the burial grounds. One of the biggest Celtic Central-European cemetries was found near Jenišov Újezd in Bilina region. The most famous Celtic treasure trove, found in the Giant Spring near Lahošť in Duchcov region, besides the samples of bronze braces, bracelets, rings and ringlets, contains a copy of a bronze pot. Nowadays it is impossible to find out how much bronze jewellery was stored into the waters of this spring (about the year 350 B.C.) by some Celt of a high social position, who wanted in such a way to earn the favour of supernatural powers and godheads. The settlements and burial grounds of old Teutons, who replaced the Celts, have survived since the Roman times and the people´s migration (in the I century B.C. – the V century A.D.). The Teuton culture, with a lot of imports from the provincial surroundings of Rome, is represented, first of all, by the findings from cremations of commons (ordinary people) or from the graves of unburnt bodies of Teuton aristocracy. In the broken up prince´s tomb (near Lysec) archeologists found a bronze frying pan (now it is in the collections of the National Museum in Prague), which is the only representative of the primeval history of Teplice whose maker´s name we know. According to the stamp on the handle it was produced in the work-shop of T. R. Sitt and C .A. Hanonn in Roman Kapua and got to the Under the Ore Mountains Region as a result of a business transaction.

History of the Teplice region and North-West Bohemia. Early Middle Ages and the Residence in Prosetice

The exposition exhibits the archeological findings on the territory of the Teplice region in the context of the historical development of north-west Bohemia, from the early Slavonic Age up to the beginning of the high Middle Ages, that is the VI-XIII centuries, in case of the defunct residence in Prosetice – the period from the end of the XIV century and during the XV century. Separate parts of the exposition embrace several spheres of interest.

First of all, it is the Slavonic expansion from the original settlements between the Dnieper, the Dniester, the upper Vistula and the river Pripjat to the territories of our country in the VI century, where the new settlers gradually colonized the fattest land. Another part of the exhibition puts the accent on the foundation of the oldest sites of ancient settlements. Among them the most impressive is a small castle in the middle reaches of the river Bilina built in the IX century in a privileged position on the tongue of land (present Zabrušany). Another part of the exposition is devoted to the development of the administrative system at the time of building up the Czech state, when the gradual loss of importance of the ancient settlements was closely connected with the appearance of new centres systematically founded by the Prague prince within his strategy. Among them there was a site of the ancient settlement built in Bilina at the end of the X century. The findings from this thoroughly fortified area provide documentary evidence about its settlers and also of burials, which show some diversions from the so-called pagan rituals towards the Christian conception of belief. The significance of the Bilina centre is eventually emphasized by an expressive cumulation of the settlement findings below the castle, where, as it is supposed, used to be a market. With the building of the Romanesque church by the custodian of the settlement Mstiše in 1061 ( in this locality now there is St. Peter and Paul´s Church) the first phase of Bilina´s birth started. The town markets of the XII-XIII centuries often preceded the appearance of the high Middle Ages towns, such as Duchcov, Teplice, Most, Ústí nad Labem, Děčín, Litoměřice, Lovosice, Třbnice, Žatec, Louny, Libochovice, Budyně nad Ohří. The separate sections of the exposition concern religious conceptions, country life, trade, and the formation of stone architecture in the regions of Teplice, Duchcov and Bílina. The exhibits concerning the civilziation of the wider period are the findings from the high Middle Age residence in Prosetice dated the second half of the XIV century and the whole XV century. Its vestiges, related to the older settlements, were discovered during the archeological research made by the Teplice Regional Museum in 1983 downhill under today´s train station. Besides it, a cellar destroyed by the fire was found as well, on its floor there were different iron objects and utensils originally meant for storing food supplies. On paper the existence of Prosetice is proved by mentioning the nun of the Teplice convent Margareth de Brassyeticz. Unlike the preceeding periods,which were investigated mostly archeologically, the XV century is a time when the increasing written evidences specify our knowledge of the hisory of the region.